The Lawrence Batley invites you to a special backstage tour of the Theatre building, for a unique opportunity to find out about the stories of this historic building and have a look of what is going on behind the scenes.

The tour starts at 11am, takes 1 hour, exploring front of house and backstage. Afterwards settling in our very own café for a nice cuppa and afternoon tea.

The tour is taking place on the following dates:

For tickets, you can book online via the website or call the box office.

This entry was posted in Apr, Events, June, Mar, May.

Have a great weekend!

It may be that one of your friends or colleagues may have forgotten to re-subscribe and is missing their Friday Flyer but no need to worry. They can easily see the Flyer on this blog or subscribe to our mailing  list again by clicking to stay in touch

This entry was posted in June and tagged Friday Flyer.

After spending many years looking after his grandparents who both suffered a stroke, Arshad Farid has launched in-home care company, Caremark Calderdale, The Clock Tower, Shaw Lodge Mills, Shaw Lane, Halifax, HX3 9ET. The compassionate businessman has aspirations to tackle the growing need of quality care and social isolation that is prevalent in the region. He is looking forward to bringing employment and great quality care to people living in Calderdale.

“The thing that sets us apart from other providers in the area is that we are challenging the current model for delivering care. We’re putting a brand-new system in place to meet the varying needs of our clients. Our aim is to be the carer of choice for the people of Calderdale, inspiring elderly and vulnerable members of the community to live independently, for as long as they possibly can.”

On 17th June, Arshad – known as Ash – invited the Mayor to his office for the business’ official grand opening. The buzz of the day generated much attention with members of the public and Caremark’s team enjoyed meeting some of the people they would be caring for in the coming weeks and months.

The 34-year-old has spent most of his career working in financial services until, in recent years, he opened an indoor football centre to promote sports and exercise to the local community. It was during this time that Ash became a carer for his grandparents after they both, unfortunately, suffered a stroke, deciding to sell his football centre and launch an alternative community-minded enterprise instead.

“Taking care of my grandparents was the only right thing to do, I didn’t think anything of it. It was when my friends mentioned that I was a ‘carer’ that it prompted me to start thinking about bringing a new service to the community. I wanted to make a real difference and Caremark’s proven quality of care can do just that. The people of Calderdale were so welcoming of my previous business, that I believe they will do the same for this one.”

At the end of May, Ash and his newly appointed Care Manager, Vicky Burrows, received registration from the Care Quality Commission. Caremark Calderdale, based at the Clock Tower on Shaw Lane, has already enlisted the help of local care workers, to satisfy the demand for their growing list of clients. Alongside, Vicky – who comes with 13 years or experience in the care industry – Ash is looking to bring employment to a team of office staff and care workers over the coming months.

As well as overseeing operations, Ash is keen to start fundraising in the area. As part of the official opening celebrations, the team raised over £100 for The Alzheimer’s Society annual Cupcake Day to raise awareness and help make a difference to more lives.

This entry was posted in Events, Health, June, Staying Well and tagged Caremark.

Have a great weekend!

It may be that one of your friends or colleagues may have forgotten to re-subscribe and is missing their Friday Flyer but no need to worry. They can easily see the Flyer on this blog or subscribe to our mailing  list again by clicking to stay in touch

This entry was posted in June and tagged Friday Flyer.

The 35th school reunion of Withinfields and Victoria schools will be held on Friday 21 June, 7:30pm at Southowram Cricket Club.

Pie and peas will be available and a raffle will be held.

All former scholars are invited along with their partners for what promises to be a great evening!

This entry was posted in Events, Hipperholme & Lightcliffe, June.

Tea in the Garden with Friends of Rishworth Mill Dam

The Friends of Rishworth Mill Dam invite you to Tea in the Garden on Sunday 23 June, 1:30pm-3:30pm at The Gatehouse, Rishworth HX6 4QE (opposite Rishworth Palace).

Have tea, coffee and cake and learn about the project and plans for the future.

Tickets are £3 and are available from Geoff on 07912 079999, from the Malthouse Hotel in Rishworth, Ripponden library and from Hair Care in Ripponden.

If you are going by car, can you please use Heathfield school car park.

Routes Festival is a family friendly event that provides a platform for young musicians aged 12-24 to showcase their talents on an open and accessible stage. This year on Saturday 22 June, 1:00pm-7:45pm at Square Chapel Arts Centre,  there will be live music across two stages throughout the day, encompassing a wide range of musical styles – from pop to indie, metal to acoustic.

See some of Calderdale’s most talented young people! Plus there’ll be a special festival food offer available from the Square Chapel café bar throughout the day.

The Halifax Food & Drink Festival runs across the weekend of Saturday 29 and Sunday 30 June 2019, 9:00am-5:00pm bringing together the very best of the regions home grown local produce along with a taste of Yorkshire and the rest of the world. 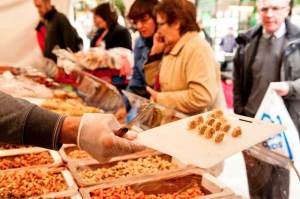 The festival will take over a number of town centre streets (Southgate, Cornmarket, Russell Street and the Woolshops) with around 100 stalls and exhibitors promoting a vast offering of both food and drink.

Plus a live demonstration kitchen with local chefs and regional food producers onstage, showcasing talents and tricks in the kitchen.

This entry was posted in Events, June and tagged Halifax Food Festival.

This week is Neighbourhood Watch Week 2019 where we’ll be celebrating the amazing work our volunteers do in their communities. We’ll be looking at areas where you expect Neighbourhood Watch to operate in and around (burglary) as well as some more unexpected ones (knife violence and social isolation).

Our message this year is that when it comes to Neighbourhood Watch, there is #MoreThanYouExpect.

To kick start the week we have today the national neighbourhood watch organisation has launched Neighbourhood Watch Inspiration, a collection of the most innovative work being undertaken by our volunteers across England and Wales.

The database contains examples of how Neighbourhood Watch groups are changing their communities for the better. In each case, volunteers explain how they developed their project, the impact it had on their community and how they overcame any challenges.

Neighbourhood Watch Inspiration allows users to contact the author of each example with the hope of generating fruitful conversations between members.

We’re encouraging members to tell their stories on social media. How has Neighbourhood Watch helped your community? Why should people start their own schemes? Be sure to use the hashtag #MoreThanYouExpect when you post!

This entry was posted in June, volunteering and tagged National Neighbourhood Watch Week.

Healthwatch Calderdale is working on a project to source the views of people with experiences of local Child and Adolescent Mental Health Services (CAMHS).

Healthwatch believes that in sharing your experiences, anonymously, they can help make a positive difference. They will share these stories with the CAMHS service provider and the commissioner (Calderdale Clinical Commissioning Group), to ensure people’s voices are heard, highlighting the issues raised and making recommendations for positive change.

To have your say please complete this survey: https://www.surveymonkey.co.uk/r/CAMHS
If you have any questions please contact Joanne Douglas at Healthwatch Calderdale via joanne.douglas@healthwatchcalderdale.co.uk

This entry was posted in Health, June, Young People and tagged Healthwatch Calderdale.