Harry Potter Night is almost upon us!

Tickets are £10 for children and £8 for adults, but adults will be able to take part in the lessons too. Tickets can be purchased from www.ticketsource.co.uk/discover

Choose your house and take part in four Hogwarts lessons. Please note, all houses will take part in all four lessons, including Slytherin!

Explore Fantastic Beasts with the amazing ZooLab! There will be a History of Magic with Professor Binns. Help Professor Sprout re-pot mandrakes and spend half an hour in the world’s best place for a free period, Gryffindor Common Room.

Make sure you come dressed as your favourite character. There will also be opportunities to guess how many Bertie Botts Every Flavour Beans are in a jar and come face to face with the Fat Lady and guess the Gryffindor Common Room Password (£1 per go).

This is a not for profit event, all the money raised through ticket sales go towards putting this fantastic event on. Not to be missed! 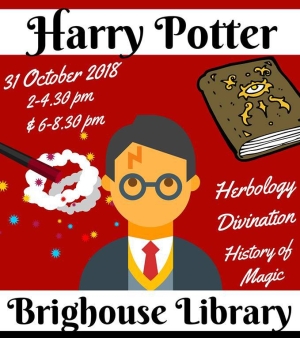 Visit Calderdale’s very own answer to Hogwarts at Brighouse Library for a special event celebrating all things Harry Potter.

Choose your house and take part in four Hogwarts lessons. Please note, all houses will take part in all four lessons, including Slytherin! We have History of Magic with Professor Binns, played by the incredible story teller Robin Simpson. Delve into Divination with Professor Trelawney, played by spellbinding Susanna Meese. Help Professor Sprout (Fiona Willats) re-pot mandrakes and spend half an hour in the world’s best place for a free period, Gryffindor Common Room.

Make sure you come dressed as your favourite character. There will also be opportunities to guess how many Bertie Botts Every Flavour Beans are in a jar and come face to face with the Fat Lady and guess the Gryffindor Common Room Password.

We imagine you will be eager to enrol!  £10 per child and £8.50 per adult. Place are limited book www.ticketsource.co.uk/discover

Recommended for children age 6 plus. Children much be accompanied. For more info contact Ben on 01422 392620.

This entry was posted in Brighouse, Events, Get Involved / Have Your Say, Oct, Young People and tagged Brighouse Library, Halloween.

Storytots – The Tiger Who Came to Tea

There is a Storytots session inspired by the well-loved book ‘The Tiger Who Came to Tea’ by Judith Kerr at Brighouse Library on Monday 23 July, 10:30am-11:30am.

You will listen to the story and make your own tiger-themed crafts. You will even get to play the brilliant game, Pin the Tail on the Tiger!

This activity is suitable for children aged 2-4 All children must be accompanied by an adult at all times.

Places are limited so tickets should be booked through Ticketsource.

For some people, a housing crisis means not getting planning permission for a loft conversion. For others it means, quite simply, losing their home.

Dispossession: The Great Social Housing Swindle is a feature documentary directed by Paul Sng (Sleaford Mods Invisible Britain) and narrated by Maxine Peake, exploring the catastrophic failures that have led to a chronic shortage of social housing in the UK.

These failures include government policy that prevents local councils and housing associations from building homes for the 1.4 million people on council housing waiting lists and the quarter of a million homeless people in Britain. Or the deliberate neglect of council estates by local authorities that s used to justify regeneration projects with private developers, which often force those who cannot afford homes in the new properties to relocate to other parts of the country, far from their families and support networks.

With unprecedented access to residents, politicians and experts in the housing industry and media, Dispossession is the story of people fighting for their communities, of people who know the difference between a house and a home, and who believe that housing is a human right, not an expensive luxury.

The screening is FREE but places are limited so you are asked to register with Eventbrite.

Book an appointment to discuss your group’s needs whether it be:

In this joint session with WYCAS Sector Support Calderdale can help with all kinds of issues…
and support your group or organisation to become stronger, achieve more and be more sustainable…

For information about Sector Support Calderdale and the services we provide: www.sectorsupportcalderdale.org.uk

‘After the Flood’ Photographic Exhibition at Smith Art Gallery

Over Heritage Open Days September 7 – 9 there will be a special photographic exhibition titled “After the Flood” by Mike Bentley, who has documented the demolition and rebuilding of Elland Bridge following the devastation of the Boxing Day Floods in 2015. A free local Heritage Trail leaflet is also available.

Mike Bentley, has been interested in photography since receiving his first camera from his grandad who was a Halifax chemist, and notably, the first in Halifax to stock film and offer a processing service to members of the public back in the 1930s.

Mike estimates that he visited the Elland site on over 100 occasions and took approximately 2500 photographs during the project. All of the images were taken from publicly accessible areas, and the selection displayed in Brighouse is presented in approximate chronological order to show the progression of the works and the subsequent re-opening of the new bridge and canal.

Mike said of the project:

“Initially I visited the bridge in March 2016 out of interest to see what was going on. As the demolition of the old bridge progressed, its original structure was revealed and I became interested in how the bridge must have been built all those years ago without the use of modern excavators and cranes.

“I became fascinated with the complexities of what goes into the building of a new bridge and it was then that I decided to record the rebuilding works through photography.”

Smith Art Gallery is a purpose built late Victorian Art Gallery opened in 1907 by Queen Victoria’s daughter, Princess Louise. One room is used for the permanent collection of Victorian paintings while the other hosts a splendid mix of exhibitions, including many by local and regional artists.

This creative writing workshop with local writer, teacher and library staff member, Emma Decent uses the resources of the library for inspiration, so go along and go on a creative journey with the help of maps, stories in the fiction section and more.

Admission is FREE but tickets must be obtained online here

This entry was posted in Brighouse, Feb, Get Involved / Have Your Say and tagged Brighouse Library, Calderdale Libraries, Creative Writing, February, Get Involved, Workshop.

Well Aware is a recovery course developed and delivered by workers and volunteers with lived experience of mental distress.

All sessions will be held in a safe, non-judgemental and confidential space.

In the six weeks we will look at a range of topics including:-

Anyone wishing to come on the course should contact Recovery and Support Team at Healthy Minds to arrange an informal chat.

Improve how you feel at ‘Head Space’ with Healthy Minds

Healthy Minds understand the problems people face on a day to day basis and offer a place where you can get support to manage life’s ups and downs.

If you want to improve how you’re feeling in a fun, friendly and relaxed atmosphere then this new course might be just what you’re looking for.

Or register your interest online at Healthymindscalderdale.co.uk

This entry was posted in Brighouse, Get Involved / Have Your Say, Nov and tagged Brighouse Library, calderdale, Calderdale Libraries, Get Involved, Head Space, Healthy Minds, November.

Calderdale Libraries are staging a number of events and activities at Brighouse Library and Smith Art Gallery as part of the festival including FREE author talks, a poetry evening, writing workshop and more.