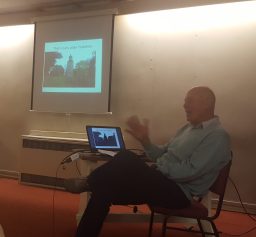 Ian Philp, Chairman of the Friends of St Matthew’s Churchyard (Hipperholme & Lightcliffe) visited the Men United at Ovenden Park Group on Wednesday 14 September to give a talk and presentation about the continued work carried out by himself and the Friends of Group who volunteer in order to restore the graveyard at Lightcliffe Churchyard to its original state.

The group was first set up in 2012 with the aims of ensuring the churchyard is cared for in a way which makes it a place in keeping with the function of burials, with an atmosphere of respect and commemoration for the departed, a pleasant, attractive place for all visitors, a haven for wildlife and a place that values and protects local heritage.

After 3 years of hard work there are now records for 11,279 burials on the site which can be searched through at lightcliffechurchyard.org.uk where you can also keep up to date with the latest news from the Friends of St Matthew’s Churchyard or make a donation to support their continued work if you wish to do so. 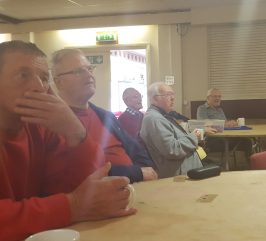 The Men United Group were intrigued to hear about some of the people of interest buried there, particularly the chest tomb of Mary Guest whose son Lieutenant General Joshua Guest 1660 – 1747 is buried in Westminster Abbey where a monument was erected to him by his widow Sarah who is also buried near her husband in the Abbey.

Lieutenant General Joshua Guest was in Scotland in 1715 – 16, and commanded a party of dragoons which pursued and overthrew Jacobite fugitives at Perth 21 January 1716. The Lockhart Papers give a story, claimed to be direct from Guest, relating to the period of the Spanish invasion of Scotland in 1719… read more here…

Men United would like to thank Ian Philp for visiting to give such a captivating talk and the group are now planning on visiting the graveyard at Lightcliffe Churchyard to have a look around and hear some more of the history surrounding the grounds.

You can also message the group on Facebook here

Men United at Ovenden Park are now on Facebook

Find the Men United Group on Facebook to keep up to date with all that’s going on and get involved if you wish.

If you know of a man who may benefit from 2 hours out on a Wednesday morning then be sure to pass on the message.

Whether that be your husband, father or grandfather rest assured they will be made to feel welcome.

This week will see Community Matron, Sheila Kolanovic pay a visit to the group as part of Mens Health Week 2016.